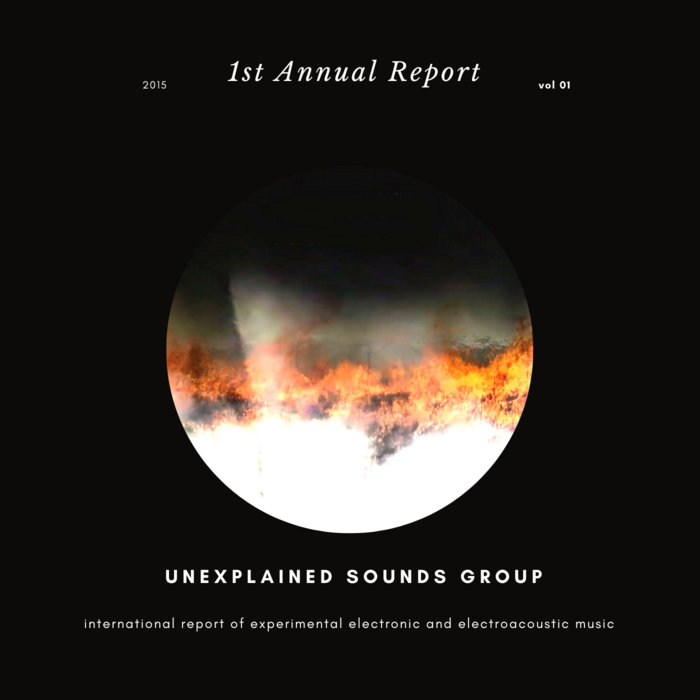 Ireen Ice This beautiful music will help to plunge into the world of your memory intertwined with fantasy and subtle emotions. Thank you very much, Raffaele Pezzella!!!! Favorite track: Sonologyst - Nocturnal anomalies.

jean deaux i listen to a lot of compilations of this type of music (whatever this type of music is) and this one takes the cake. a couple of old classic electronic pieces, armloads of new stuff, all of which is worthy attention, and nearly 13 hours worth for a mere 8 euros.

After one year of explorations into the US, UK, Italian, Spanish, French, Eastern European, Scandinavian and German experimental underground music scenes, it is now time for Unexplained Sounds Group to bring together the top artist selection into one comprehensive survey.
It’s difficult to communicate in a few words the richness of experience and knowledge I gained by being in touch with so many creative artists from these countries, it’s been beautiful to go deep into the differing music cultures and be able to enrich my understanding of them. I wish to profoundly thank all of the musicians, DJs, bloggers, labels, writers, free thinkers and passionate fans who believed in this project. Thanks to them, Unexplained Sounds Group has grown from an idea into a reality and is now a point of reference for many people around the world.
People’s enthusiasm has given me the energy both to go on with new explorations into more countries’ scenes and to delve deeper into the experimental audio territories of countries I wasn’t able to examine more thoroughly. So I hope 2016 will be a year of further adventures in music and “unexplained sounds”.
It’s impossible to thank the hundreds of people who were close to me throughout this time, but I would like to mention some of them who were vital for the whole work:

All the artists who featured on USG surveys;
Thomas Herbst for his kind support and permission to include Steve Reich and Morton Subotnick tracks from his Karlmusic label catalogue: karlrecords.bandcamp.com ;

Pedro Menchaca, for his great support and friendship on Radio Kras from Gijon, Spain: radiokras.blogspot.it ;

Tom Byrne, from Dublin, for his never-ending support on the “Sentient” radio show: www.facebook.com/tom.byrne.547?fref=nf ;

Andre Quaresma for his support on the Coimbra University radio show “The Music Makers” www.facebook.com/themusicmakersruc/?fref=ts ;

Ben Ponton for his collaboration with Resonance FM radio from London: www.resonancefm.com ;

Christian Fiesel and Scott Boatright for support on their radio shows “Modul303” and “Sounds From the Corridor” : www.modul303.com?lang=en ..... www.facebook.com/scott.boatright?fref=ts ;

Benjamin Pereira for his great support with reviews on the “catalogue of wonders” blog and “the fabrication of wonders” web magazine: www.facebook.com/thefabricationofwonders/?fref=ts ;

Cesar Naves and Jaime Rguez for their friendship and never ending support in Spain:
www.facebook.com/cesar.m.naves?fref=ts

Tracy Perry for support on her show “Expansion of Presence” : www.mixcloud.com/TracysEOP/;

Purple Crow for his great support and precious advice on every aspect of work and life: www.facebook.com/purple.crow.1?fref=ts .

Antonio Cristofaro for his help and support on Wednesday nights: www.facebook.com/antonio.blacksun.77?fref=ts .

Also, I want to thank all of the Unexplained Sounds Group followers. Without you, this project simply wouldn’t exist.

You will find, on this final report of 2015, a wide selection of the artists who have featured in previous surveys, with new and unreleased tracks, along with five additional honored guests who together comprise a 2015 sigillum: Steve Reich, Morton Subotnick (two of the world’s most important living composers), and the Claudio Ferrari - Bruno Gussoni duo from Italy.

The release download includes the original cover art by E. Gabriel Edvy, and a review by Elias Vivas.

Music is out there.
Sonologyst