Anthology Of Experimental Music From Mexico 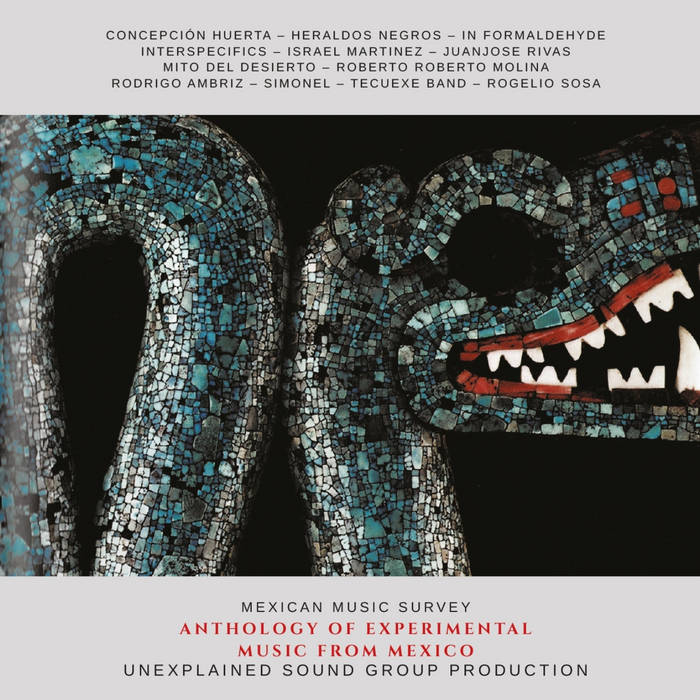 TigerTorakio Amazing album of drone, musique concrète, and other weirdness. A fog of shifting textures to wander through. Then you fall headlong into the gaping hole of "Et voici la fièvre," and when you emerge, you're not sure you're still in the same continuum you started off in. Favorite track: Rodrigo Ambriz - Et voici la fièvre.

Marco Zonta Another amazing experience from USG, great trip through Mexican drones and experimentalism, hypnotic and peculiar, you can hear it’s different but the trademark is always there. Difficult to choose between so many great tracks, but Rodrigo Ambrix is just...amazing. Favorite track: Rodrigo Ambriz - Et voici la fièvre.

Rob Very Interesting sounds on this release. I have a few favorite tracks from this album. I rate this Compilation 9 out of 10 stars Favorite track: Concepción Huerta - INVASIÓN.

Whether it is being inspired by ancestral rituals, mixed with elements of endemic musical styles, or even if it was the result of pure introspection, there is no denying that Mexican experimental music has its very defined set of idiosyncrasies, which can only come from living in a place that has always been divided between progress and tradition.

For this new compilation, the Italian label Unexplained Sounds Group has gathered artists from different generations who are striving to keep this "scene" - a term I use reluctantly - alive, not only through their music but also by creating spaces and communities for other artists, both national and international, to thrive in. Even if its presence runs deep and is widely felt, stumbling upon this music feels like a reward, like unlocking a door to a secret place where the sound is deep, wide, and treated as a living entity; where live performances feel more like processions, liturgies, or mediums between this realm and the unknown, rather than simple entertainment. In that sense, experimental music in Mexico is a strange paradox: it is both a whisper and a scream.

Selected by "A Closer Listen" web magazine among the leading records to music perspectives in 2021
acloserlisten.com/2021/01/01/where-will-music-head-in-2021

Unexplained Sounds, the renowned Neapolitan independent directed by Raffaele Pezzella and specialized in avant garde / dark ambient / drone music / concrete music / experimental electronics / et. al., has a look on the here and now. His celebrated compendiums of experimental music from various latitudes recently encompassed the look at the New World for a few months, between late 2020 and early 2021-then enramble toward the Far East (Anthology Of Experimental Music From China) , May 7). Testimonian this look at two new series titles: Anthology Of Experimental Music From Mexico (November) and Anthology Of Experience Music From Peru (March).
The excellent Mexican compilation is more comfortable framed within a label like Unexplained Sounds. This is because charros continue to hold a long avant-garde hearing impartuary modeled by a teratologic timbral variability the most of the improvisatory, dark / off colors, atmospheres and textures with computable visibility in zero. Endless caravans of crushing and inconvenient frequencies, severe that don't seem to be really there. Telepathic noise epathed from the heart of darkness. These features are all intrinsic to the thick of the catalog of the Italian label.
These lines include ′′ Amydrós ′′ from Heralds black and ′′ NoirLand ′′ from iN FORMALDEHYDE, as well as ′′ Topologies of Desire ′′ by Interspecifics. Also ′′ 17 o 48 ' N ′′ by Juan José Rivas, ′′ Scandinavia Por Ala Delta ′′ by Roberto Romero Molina, ′′ Et Voici La Fi èvre ′′ by Rodrigo Ambriz and ′′ Totaua ′′ by multidisciplinary pioneer Israel Martinez. These last four numbers are however nuanced respectively by approaches to industrial roll (′′ 17..."), ghostly glitter of synths and samples that immediately refer to the fantastic films of the golden age of Mexican cinema (′′ Scandinavia..." ), a furious verbarréic iteration that resurfaces dissatisfied into deformed slowed voices (′′ Et Voici..."), and the manipulation of tapes grafting natural sound recordings ( ′′ Totaua", during the second half).
Highlights, because they exceed the average score, Tecuexe Band's shares (only act of the release that appears twice, always recreating tribal music in abstract key), by Mito Del Desert (′′ Larva Ella Que Disruptorna ′′ is the closest thing to a surreal sound script I've heard in a long time), by Rogelio Sosa (the ominous concrete cascading music of ′′ La Noche Del Nahual ′′ breaks the fires) and the duplicate contraposition of ′′ Revelation ′′ (Simonel, bliss pop crispado) e ′′ Invasion (Concepción Huerta, disturbing reversal of ′′ Revelation ′′). Regarding the physical disc, the pay download includes five additional tracks, which I'm staying with Gibran Android's ′′ No Solo Es Pain ′′ near the dialectic Einstürzende Neubauten, and the refreshing ′′ The Days Before ′′ by Sebastian Fuentes.
apostillasdesdeladisidencia.blogspot.com/2021/06/anthology-of-experimental-music-from.html


Edited by ©Unexplained Sounds Group
Curated and mastered by Raffaele Pezzella
Special thanks to Jorge C. Ortega for his
precious collaboration
Cover image: The Turquoise Snake
unexplainedsoundsgroup.bandcamp.com
©2020 All rights reserved