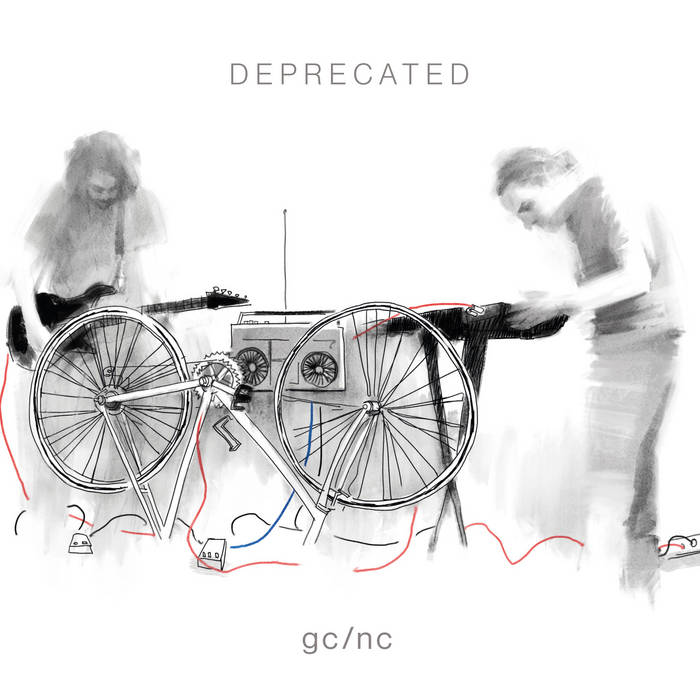 Ricardo Barron Electroacoustic albums are my favorites, and gc / nc are excellent musicians a cover that reminds me of europe with electroacoustic and improvised sounds, great work. Favorite track: Cycle.

gc / nc is an electroacoustic duo based in Belgium and the Netherlands, consisting of Sjoerd Leijten and Patrick Bossink. They play instant electronic compositions using self-programmed software and self-made controllers.

DEPRECATED is the result of a residency at studio Klangendum inside WORM in Rotterdam (NL). During this residency they explored the realm of broken, obsolete and unwanted sounds and experimented with various classic synths (a.o. ARP 2500, Serge), combined with bicycle wheels, guitars, radios and audio programming environment SuperCollider.

Through the use of magnets, reed switches and arduino's (microcontrollers) in conjunction with audio coding environment SuperCollider, gc / nc turn bicycles into electroacoustic instruments. The wheels of the bicycle are controlling the sound of their instruments – a guitar and a synthesizer. The musicians have to spin the wheels to produce sound. The bicycle wheels open up new sound possibilities for the musicians, but function also as disruptive elements, a voluntary self-sabotage, since they are not able to play their instruments in the conventional manner. Piezo discs enable them to use the bicycle as a percussive instrument and to create tones with the spokes. A radio is used to record small fragments of radio channels which are directly used in the performances. When on tour, gc / nc always borrow a bicycle from a local, which they then prepare for the concert.
www.youtube.com/watch?v=-YU_wrTHvdU&feature=emb_title

VITAL WEEKLY
Somewhere in the back of my mind, I had this note that the Unexplained Sounds Group on Facebook is all about field recordings, even when they also released a CD by Sonologyst (see also elsewhere). This CD proofs otherwise. Here is a duo from The Netherlands and Belgium, Sjoerd Leijten and Patrick Bossink. From the latter, I had not heard before, but from Leijten I reviewed a cassette in Vital weekly 1239. He used the software program SuperCollider, one of the more mysterious for a simple soul as myself, and here the two of them go further, using software of their own design and self-made controllers. In the studios of Klangendum (which is part of Worm in Rotterdam), they set up shop with the synthesizers in that lovely space, along with bicycle wheels, guitars, radios and, also, SuperCollider. The wheels of the bicycle control the guitar and the synthesizer and by spinning the wheel, sounds emerge. Piezo discs are used on the bikes for percussion, and a bit of radio comes in extra. Sounds confusing? It probably is one of those cases of 'seeing is believing'. This duo also plays concerts and I would think it is something worthwhile to see once the doors open for venues. The music on this disc is interesting enough, and goes beyond strict descriptions of 'improvisation', 'musique concrète' or even 'alternative rock music'. They operate in the same sound world as Lukas Simonis, the man behind Klangendum, with a similar richness when it comes to blending and bending sounds and genres. The computer processing, such as it is, is buried deep in the mix, and the music is rather refreshing, bouncing up and down, with noisy components, rhythms, textures and sometimes even 'song-like' structures, with the energy of a spiky, punky attitude. And yet, it is all experimental, weird and strange enough, entirely fitting the realm of Vital Weekly. At thirty-four minutes and eight pieces perhaps all a tad too short, but there are two extra pieces in the download. (FdW)