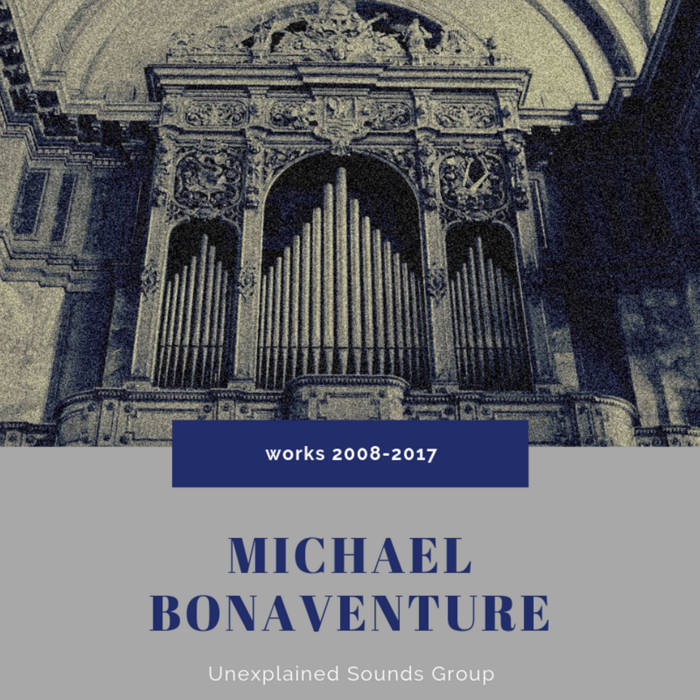 Curating an anthology of Michael Bonaventure's works over the last decade was not only a superb pleasure, but a privilege too. Bonaventure is one of the rare examples of a classically trained composer who, starting from his early instrumental musical education at the organ (the first synthesizer, as he loves to say), has been able to explore the most innovative paths in terms of avant-garde music, working with solo organ compositions, vocal processing, contemporary electro-acoustic techniques as well as with industrial noise improvisations. His sensitivity to different kinds of musical languages builds a natural bridge between apparently distant lands, and even the most experimental pieces possess an inner elegance that is a distinctive sign of his artistic mastery.

Michael Bonaventure was born in 1962 in Edinburgh, Scotland. A composer, general keyboardist, concertizing organist and promoter of new and experimental music, formerly based in London and now living in Edinburgh and Amsterdam, his output includes numerous electronic and electro-acoustic pieces as well as chamber, solo instrumental, percussion, choral and organ works. His music is published and distributed by Firehead Editions. Bonaventure’s sonic universe is heavily inspired by mysticism and ritual, natural and imaginary worlds, astronomical and supernatural phenomena. Recent works include the cycles ‘Seven Days’ for saxophones and piano, ‘In Orbit’ for organ and electronics, ‘Darenth’ for organ, an open-ended and ongoing series of Preludes, Interludes & Postludes for organ, ‘Castellations’ for carillon, ‘Epsilon Centauri’ for piano and electronics, and ‘Trilogy’ for choir, electronics and organ. His music has been heard in the Netherlands, Germany, France, Spain, the USA, Canada, New Zealand as well as in London and throughout the UK. Together with Huw Morgan and Lauren Redhead he is a member of the collective Automatronic, formed in 2013 to promote new music for organ and electronics, and in the Netherlands he is a member of another group, Muizmanz. Along with composers Luiz Henrique Yudo and Rene Baptist Huysmans. Muizmanz presents annual concerts mixing ancient with new music in the historic Grotekerk at Oosthuizen, just outside Amsterdam.
As an interpreter of new music since the early 1980s, he has worked with an enormous number of composers internationally and has concertized in churches, cathedrals, universities and at festivals throughout the UK, Europe & USA, broadcasting on BBC Radio 3 & Radio Scotland, premiering over 100 new works and making numerous CDs; these include four volumes of ‘Contemporary British Organ Music’ on the sfz label, and the later organ cycles of Olivier Messiaen for Delphian Records, including a universally acclaimed rendition of the massive ‘Livre du Saint Sacrement’, released in 2008.