Time is the Enemy (Tape edition) 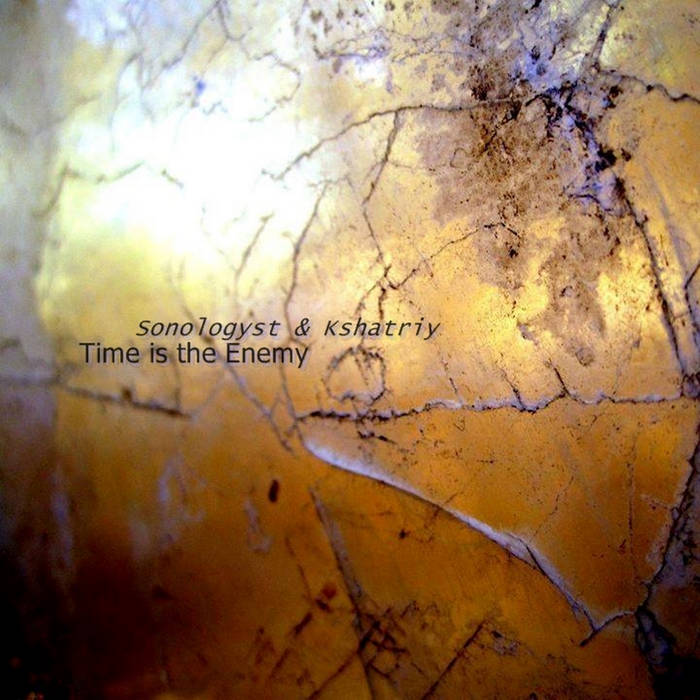 Time is the Enemy released by Unexplained Sounds Group is the latest collaboration between Sonologyst & Kshatriy. This 5-track album features a mature sound where stylistic developments are on the moderate and gradual side.
In Unaltered Mind we find three themes running concurrently: The “Divine Mind” in the metaphysical sense, the Buddhist motif of an “Uncluttered Mind” and the cognitive interpretation of the mind as a body in constant exposure to internal and external stimuli. The Venus Smile shares its name and ethos with a JG Ballard short story published in a science fiction journal of the 50’s about an ornamental object that starts generating uncontrollable sounds. Self-Luminosity is a clear metaphor for what is known in Buddhist tradition as a “Luminous Mind”. Chronopolis borrows thematic references from Piotr Kamler’s film of the same name from 1983 where the character’s existence is not related to time. The last track, Time is the Enemy, is the most lyrical piece of the album and showcases Sonologyst & Kshatriy at their musical best.

In summary, this is an accomplished work with the recurrent theme of time as its main focus and a seamlessly shared vision by two artists in control of their medium.

Sonologyst is the Raffaele Pezzella solo project from Italy. It's based on the perpetual experiment in sound, looking back to early experimentation of the Fifties and Sixties, forwarding to the future possibilities of electronic and electro-acoustic instruments, with a special attention to the relationships between music and science, music and other art forms, including literature and modern mythologies. All Sonologyst’s pieces are almost completely improvised. That’s why he calls his music “experimental”, meaning that the result is unpredictable. His music oscillates between the scientific sonic documentary and the psychedelic abstraction.
As Sonologyst, Raffaele Pezzella, is the curator of Unexplained Sounds Group, a multimedia platform created to investigate the current underground experimental worldwide music scene.


Kshatriy is solo musical project founded on June 19, 2004 in Vsevolozhsk, Russia by Bulychev Sergey.
The first step was a live gig in ESG-21.
The name of the project reflects only memories of ancient society in which spiritual values were no less important than material ones.
The music of 'Kshatriy' is based on drone style with ambient and noise elements, with no certain frames and accept any necessary sound sources...with delicate touch.